You are here: Home / Lafayette Boulevard 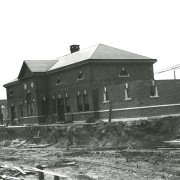 Puffs of smoke billowed up from the engine toward the sky and a cheering crowd gathered around the train as it came to a rumbling stop. It seemed as though everyone in town was gathered at the station, eagerly awaiting the door to open. It was October 23, 1886, and President Grover Cleveland stepped off the train to greet the citizens of Fredericksburg.(1) Only two decades prior, the North and South battled over this rail line chartered by the Richmond, Fredericksburg and Potomac Railroad (RF&P). The line that ran through Fredericksburg sat on a strategic point during the Civil War, with both armies laying track to move supplies and then burning it after it was no longer needed. President Cleveland’s stop in Fredericksburg was welcomed by all that day and over 100 years later Fredericksburg came together again to welcome another train’s arrival. 1926 construction of the train bridge across the Rappahannock River.

The turn of the century was the beginning of an exciting new era for train travel in Fredericksburg. Built in 1910 by the RF&P, the Georgian Colonial style train station was a gem standing proudly downtown on what was then known as Prussia Street. The street name paid tribute to the German State of Prussia, which was ruled by Frederick William I in the early 1700s. However, Anti-German sentiment took over when the U.S. entered World War I in 1917 and Fredericksburg demanded a change. City Council voted to rename the street Lafayette Boulevard in 1918, honoring Marquis de Lafayette.(2) A friend of George Washington, Lafayette fought alongside the United States during the Revolutionary War. In 1907, an additional set of tracks connecting Washington, D.C. and Richmond was completed by the RF&P, though Fredericksburg would not join the line until 1927.(3) Along with the new tracks, the bridge over the Rappahannock was finally replaced in 1927.(3) With these additions, the bustling station needed more room to grow. On May 1st, 1927, the citizens of Fredericksburg celebrated the arrival of their new train station; additional wings and a raised platform allowed the station to handle the increased traffic.(3)

The train proved to be a vital asset during wartime. The government relied on the RF&P heavily during WWII to move soldiers and supplies, so much so that traffic on the rails at this time was at its highest point in RF&P history.(3) After the war was won and soldiers returned home, the automobile quickly found its way onto America’s growing stretches of roadways. The average American family now owned a car and no longer wanted to sit on a train to get where they needed to go. The station held on for a few more decades, but eventually faded into the background. In December 1976, Amtrak closed the ticket office and the station became unmanned. With only a caretaker on site only on weekdays (locals may remember caretaker Archie Elder), the station soon fell victim to neglect. Paint peeled off of the walls, the roof leaked onto the few passengers who continued to use the station, and dark corridors became a haven for unlawful activity and vandals. The first big break in the journey to a rehabilitated station was Amtrak’s allocation of $50,000 for a new passenger platform roof in 1980. Amtrak was confident that the station rehabilitation might not cost as much as originally thought and that no other major work was needed.(4) Work on the roof was to begin in August of that year, but was delayed as the roof, and the riders, would have to wait. During the years that followed, riders were left to defend themselves against both the criminal and decaying structural elements that were making the station an eyesore on the historic downtown. To make matters worse, the station was not regularly inspected. In order to be inspected, the city had to declare it unsafe. To answer the public safety outcry, Amtrak and the RF&P teamed up with local police in 1988 to patrol the station daily.(5) The patrols were a success, but the floors were still crumbling, graffiti covered the walls, and corridors remained dark at night.

In June 1989, RF&P and Amtrak put an additional $200,000 toward the rehabilitation effort. These funds were only allocated to cover the bare bones of the building. The leaking roof, crumbling concrete, broken lights and windows would be fixed, but all cosmetic needs would have to wait.(6) Both the RF&P and Amtrak’s initial plans for the rehabilitation of the station did not comply with the city’s regulations for the renovation of a building in the historic district. The Architectural Review Board refused to permit the changes both companies proposed for the station, due to alterations such as removal of the original canopies over the passenger platforms and installation of modern glass shelters.(7) The RF&P claimed that they were not familiar with regulations for buildings in historical districts when they made their initial plan.(7) Interior photo of the Fredericksburg Train Station before renovation.

Throughout the 1980s and 90s, the Historic Fredericksburg Foundation, Inc. regularly advocated on behalf of the Fredericksburg train station. HFFI worked with city entities, ranging from City Council to the Architectural Review Board, to gather support and momentum for the preservation and rehabilitation of the station. The Foundation stressed rehabilitation and staying true to the historic design of the building, as opposed to a complete overhaul and modern redesign. HFFI was not only concerned with conserving the historical integrity of the building, but was also worried about the growing safety threat the decaying station had on the downtown community. Train riders and City Council members alike were eager to say goodbye to the crumbling train station and the dangers that came along with it. However, getting Amtrak, the RF&P, and local entities to agree on a deal to bring the Fredericksburg train station back to life would prove to be more difficult than any party imagined.

During this same time period, the RF&P reviewed the possibilities of turning the train station into a bustling center of commerce and downtown tourism; retail and factory outlet stores and tour coaches.(8) However, the RF&P was never able to negotiate a deal for redeveloping the station for retail. With no plans in place, the station continued to decay. Members of City Council grew impatient and made their voices heard. In the winter of 1989 Councilman Robert C. Wheeler referenced the large amount of money the RF&P spent on rail facilities in Richmond and Northern Virginia and urged the RF&P that it was time to invest in Fredericksburg.(9) Councilman H. William Greenup said it was “high time” that the station get restored and pressed for a time frame to hold all parties accountable.(8) Former Councilman W. Sidney Armstrong was disillusioned with the project, telling The Free Lance-Star in January, “I’m not sure there will ever be a whole lot done.”(9)

When work on the passenger platform roof finally started in 1990, things got off to a slow and frustrating start. After Amtrak and the RF&P removed the roof, work slowed to a halt. Upon spending roughly $65,000 on asbestos removal and setting aside another $135,000 for stabilizing the platform, both companies wanted to trim costs. (10) They hired inexpensive labor and sourced volunteer work from the community, to even include new cornice work done by a James Monroe High School shop class. Riders were still able to use the station during this time, but unfortunately, there was no roof to protect them from the elements. Councilman Gordon W. Shelton told The Free Lance-Star, “Stupidity tore the roof off before they had a plan in place.”(11) Volunteers donate their time to bring the neglected Fredericksburg Train Station back to its previous glory.

The Virginia Railway Express (VRE) commuter rail was another issue hanging in the balance in 1990. City Council approval of a line through the town meant more riders and increased cooperation from Amtrak and RF&P to invest in Fredericksburg’s historic station.(10) Though downtown citizens, HFFI, and city entities were eager to bring more visitors to their historic town and revitalize the area, there were still concerns to be had, given the companies’ reluctance to fully support the station’s continued use. Chief among them, parking and traffic, which had to be carefully planned for and accommodated without significantly changing the character of the area.(12) To help fund the project, the city started collecting a 2% tax on gasoline in August 1990. By September 1991, the tax raised $800,000 for the city to put toward construction costs.

In early 1992, things were finally starting to look up. The Architectural Review Board had approved a design for a new VRE passenger platform adjacent to the old station and the first commuter train was scheduled to arrive in town June of that year.(13) Executive Director of HFFI, Catharine Gilliam, was pleased with the plan, which included new windows and lights in the passenger shelter that reflected the original design. Unfortunately, the initial bids on the project came in $350,000 too high, forcing the city to take a step back.(14) The platform design was revised, and work got off to a late start in April 1992. Construction crews worked around the clock during the weekend leading up to the opening of the station. The new VRE platform had ticket machines and was handicap accessible. On July 20, 1992, excited commuters left on the first VRE train out of Fredericksburg at 5:29 a.m.(15)

Though this was a hard-fought victory for Fredericksburg, both HFFI and citizens still hoped that something would be done with the old station across from the new VRE line. In 1992 the city submitted a proposal seeking federal grant money to aid in the rehabilitation of the station.(16) With $500,000 eventually awarded from the federal government to use on the rehabilitation, Fredericksburg was ready to make their station dreams a reality. Three years later, the station finally had a buyer. Business owners Gary and Catherine Musselman moved to Virginia in the early 1990s to find the old station in a sorry state. Inspired by the building’s history and potential, they signed a deal to buy it from the RF&P in 1995.(17) Joined by restaurant owner Claiborne Thomasson, the three put one million dollars toward the project, in addition to the $500,000 federal grant, and got to work.(18) Claiborne’s opened in October 1997 to great acclaim, ushering in a new era of fine dining in Fredericksburg, and breathing new life into the train station.

Today, the train station is once again the pride of Fredericksburg. Serving 117,423 riders annually, the station is a hive of activity in the historic downtown.(19) The station connects Richmond, Fredericksburg, and Washington, D.C., giving commuters and travelers alike an alternative to the gridlock on Interstate 95. Amtrak runs six trains through the station daily. Weary train riders searching for a bite to eat need not look far. The Bavarian Chef, a restaurant specializing in authentic German cuisine, is housed in the interior of the old train station. Although Fredericksburg Amtrak train riders can no longer buy a ticket to their destination at the old station, they can still admire the historic building and hear the train whistle blow as it rolls into town.