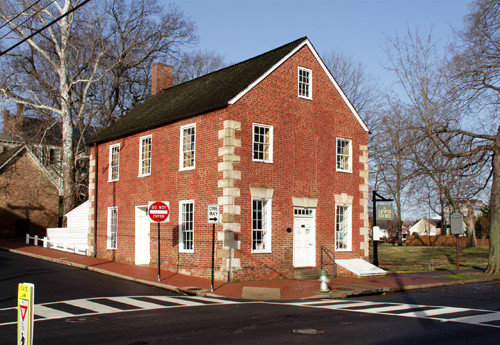 Originally built by John Lewis as a general store to be run by his son, Fielding Lewis, the building at the corner of Lewis and Caroline Streets has served as a business, a residence, and has been witness to generations of Virginians traveling Caroline Street. Following a massive renovation from 2000 to 2006 one of Virginia’s oldest commercial buildings was returned to its former distinction.

Read more about the extensive renovations done in the early 2000s in an article by Jack D. Warren, Jr.  The Lewis Store- A Restoration Project of the Historic Fredericksburg Foundation, Inc., originally printed in the Journal of Fredericksburg History, Volume 7.

In January of 2013 The Lewis Store was added to the National Register of Historic Places. University of Mary Washington Historic Preservation program graduate Cristine Lynch did extensive research on the building and its history, and completed the nomination.

Below are excerpts from the National Park Service documentation describing the building, its history, and its significance. The Lewis Store is located within the northern end of the National Register-listed Fredericksburg Historic District (VDHR File Number 111-0132) in the City of Fredericksburg, Virginia, east of Interstate 95 and one block west of the Rappahannock River. The building sits at the northwest corner of Caroline Street, a moderately busy one-way, two-lane thoroughfare, and quiet Lewis Street. Surrounding the site are well-maintained, two-story and three-story buildings, most of which are brick, dating from the early-nineteenth and early-twentieth centuries, including small businesses, residences, and the Rappahannock Regional Library. A large park-like green space abuts the site’s northern boundary. The lot, which slopes up slightly to the west, is thirty-three by eighty-two feet. The building sits on the property line at the southwest corner, separated from the street by a brick public sidewalk. Its principal elevation faces east to Caroline Street and a secondary elevation faces south to Lewis Street.

The two-story, front-gable, three-bay brick store is twenty-six feet wide by thirty-seven feet deep, with an interior-end chimney on the west elevation. Rusticated ashlar sandstone quoins reinforce each corner and stone lintels with grooved keystones cap the east-elevation openings. There is a corbelled-brick cornice and a chamfered water table. A shed-roof frame addition, built in 2001, abuts the store’s west elevation.

The Lewis Store was built in 1749 as determined by dendrochronology. It was originally a one-and-a-half story, Georgian-style store building and in 1808 a second story was added and some changes made to the exterior and interior. The current owner, Historic Fredericksburg Foundation, Inc. (HFFI), rehabilitated the structure in 2000-2006 following the Secretary of the Interior’s Standards for Rehabilitation. The building is in good condition. Although the structure has evolved over time, nearly all of the exterior and portions of the interior display integrity to the 1749 to 1823 period of significance. The Lewis Store is located in the Fredericksburg Historic District in the City of Fredericksburg, Virginia. From dendrochronology it has been determined that the store was built in 1749 and that a second story was added in 1808. It is a three-bay, front-gable, Georgian-style brick building with stone quoins, has 962 square feet, and sits on a .062-acre lot. Prominent landowner and shipper John Lewis erected the store and his son, Fielding Lewis, who was married to George Washington’s sister, served as proprietor and then became owner upon his father’s death.

The Lewis Store is significant under Criterion A at the state level because it represents the early beginning of Virginia’s retail economy. It was built during a transitional period during which permanent stores in towns replaced informal and dispersed trading. Stores like the Lewis Store offered the middle classes European manufactured goods that had previously been accessible only to the upper classes.

The Lewis Store is significant under Criterion C at the state level because it is a rare surviving example of Virginia’s earliest commercial architecture. The building is among a very small group of Virginia stores built before 1750 and may be one of only three brick stores in Virginia dating from this time period. The Lewis Store is rarer still because of its stone quoins, a highly unusual feature on colonial store buildings and a rare display of gentry values in commercial architecture.

The Lewis Store is significant under Criterion D at the state level because of the information yielded during archaeological investigations immediately adjacent to the building and within the basement. Data recovered during the archaeological testing provided insight into the building’s changing uses over time and the evolution of the building fabric. Photograph by Frances Benjamin Johnston, between 1927 and 1929. Library of Congress, Carnegie Survey of the Architecture of the South.

Learn how the Lewis Store applies to the National Register of Historic Places criteria.

Learn the historic context of the Lewis Store and its role in the development of Fredericksburg.

Read the entire National Register of Historic Places nomination as featured on the Virginia Department of Historic Resources page including detailed descriptions of the building interior and exterior, archaeological documentation, floor plans, and architectural renderings.

View the floor plans and architectural renderings, including those done by Joseph Dye Lahendro, architect of the 2000-2006 rehabilitation.